Note: Since writing this, I’ve stopped using Slack for most things. Here’s why.

Slack is a messaging tool that’s quickly become ubiquitous in large and small companies alike. It’s basically like a walled off version of AOL Instant Messenger (you guys remember that from the early 00’s right?) for your company’s internal communication.

They have apps for iOS and Android, desktop clients, and a web interface, making Slack super accessible and easy to use, plus they allow you to create Slackbots.

What is a Slackbot?

Slackbots look like users on Slack in that they can write messages, mention other people, etc., but they’re controlled by a computer not a real person. AIM had a similar bot construct that allowed people to make programs that told you the weather or dirty jokes when you contacted their bot.

While it may be cute to make a Slackbot that makes jokes (I had one running for a few weeks that poked fun at one of our sales people), they can be genuinely useful, like the Slackbot we created for Packback called Packbot.

I should back up and explain what we do at Packback.

We sell digital textbooks and offer professors and students a question and answers platform centered around their class. One of the common problems we encounter is that while our salespeople are talking to professors about their classes, they may or may not know which textbook the professor is using. They may also not be sure if the textbook is available on our site yet, which may dictate the sales conversation moving forward.

In short, the sales team needed a way to quickly determine whether a book was available on Packback, and that’s what Packbot does. So, when you enter an ISBN number in any public Slack channel, you’ll get a response from Packbot with some basic info about the textbook:

There’s not much to creating a Slackbot. If you’re familiar with NodeJS or at least some basic Javascript, you can follow this tutorial to get your first one up and running. In order to create Packbot, we used:

1. Set up the Application

If you’ve set up a Node app before, this one is about as easy as they come. There’s a package.json file that includes the dependencies we’ll need for running an Express server and parsing Slack’s data:

Then there’s an env.json file to hold our environmental variables on our local machine:

And finally a Procfile for Heroku. This just tells Heroku what kind of application we’re running so it can set up the standard environment.

First, let’s talk about what this app needs to do:

Pretty straightforward, and Node makes doing things like web requests a breeze, so it’s a great tool for this. I’ve done more PHP in my time at Packback, so it was nice to use something new for a change. Here’s a breakdown of what the Node app does in the app.js file: First, we import the modules required and set the port for running Express locally:

Adding a POST request endpoint is super easy. Ours just grabs the input from Slack, checks that the token matches and that a Slackbot is not making this request, makes a GET request to our product search API, and returns the response if a single result is found:

There’s certainly some room to improve the logic here for parsing the request and results, but it serves its purpose as an internal tool.

One of the problems I ran into was testing the Slackbot locally. After adding a function to run the server:

I tried sending the POST request locally, but I couldn’t get my body response parsed properly, so I just added a GET endpoint to the app.js file:

Now I can hit http://localhost:1337/?isbn=<ISBN> and see the response that would be returned to Slack.

Finally, once I had everything running locally I pushed the repo up to Heroku. To set up Slackbots, go to Integrations then add one for Outgoing Webhooks. 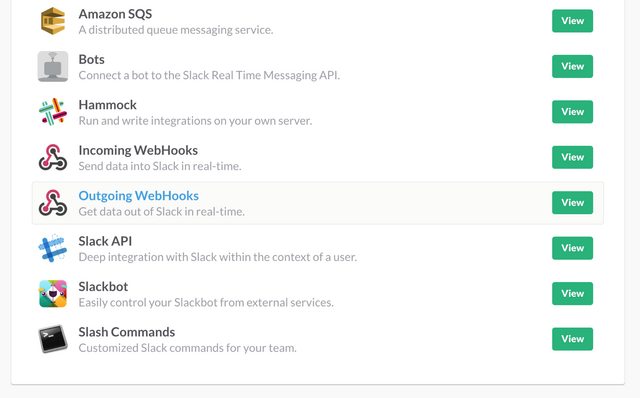 From there, I added the URL to our Slackbot on Heroku and got the token for our environmental configurations.

We have since built an internal tool to allow people to search for books on our platform, but that requires going to a new URL, logging in, and knowing how to use the tool.

What I love about the Slackbot solution is that Slack offers a platform that makes data accessible and lowers the barrier to accessing it while maintaining security. We know that anyone with access to our Slack channels should also have access to our product data quickly, so this tool makes sense for us.

If you’d like to build your own Slackbot, feel free to grab Packbot’s open source code as a starting point.