Running My Business From an iPad 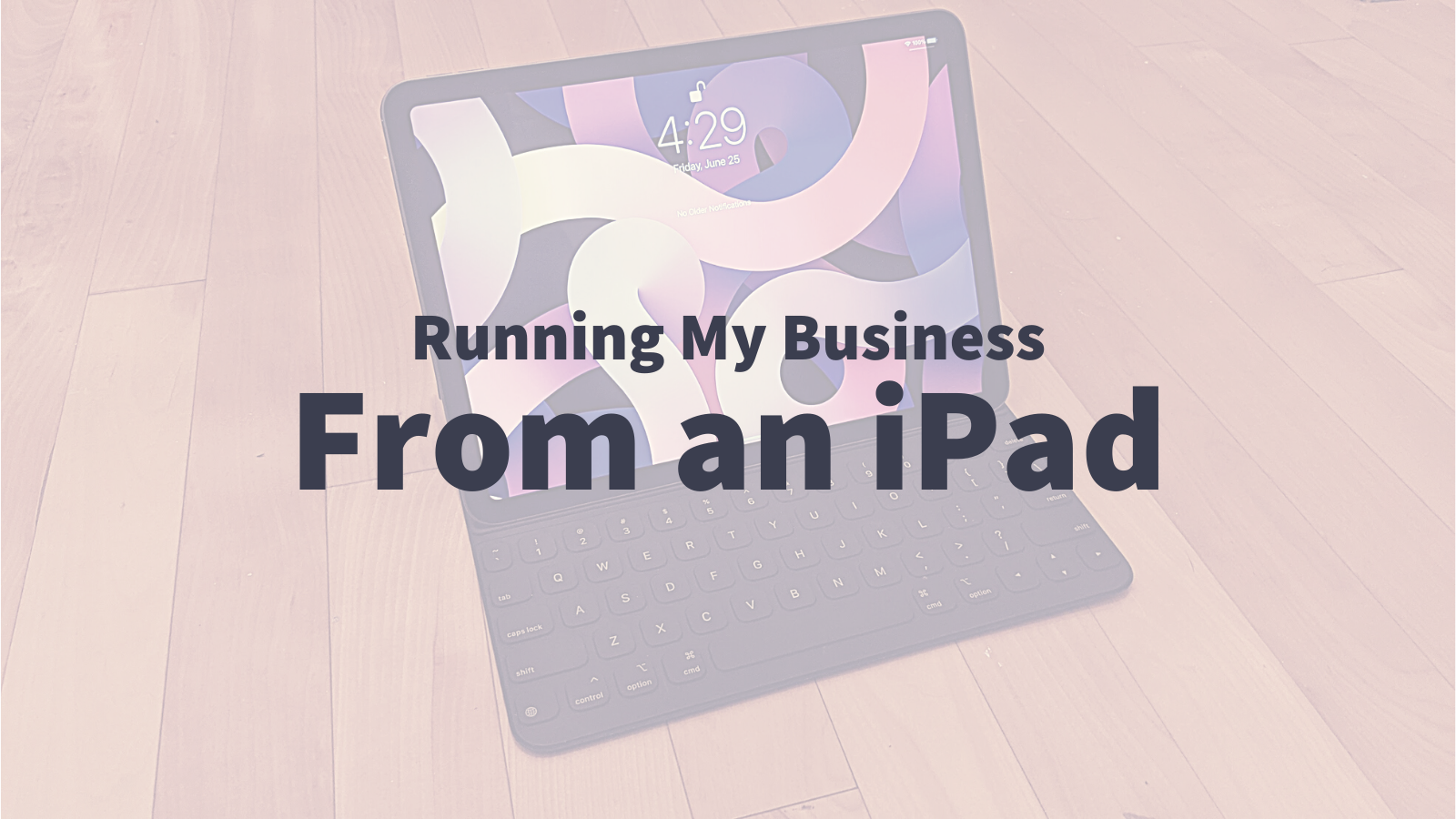 Earlier this year, I decided to get an iPad as a more portable work device. I haven’t owned an iPad since the first generation models back in 2010, but with the larger sizes and full-size keyboard, I figured it could feasibly serve as a laptop replacement - at least for short stints.

I’m going on a vacation later this month, so I figured I would try exclusively working on my iPad for a week, just to see if any parts of my day-to-day workflow were difficult or impossible with it. I shut my laptop down and put it in the closet. 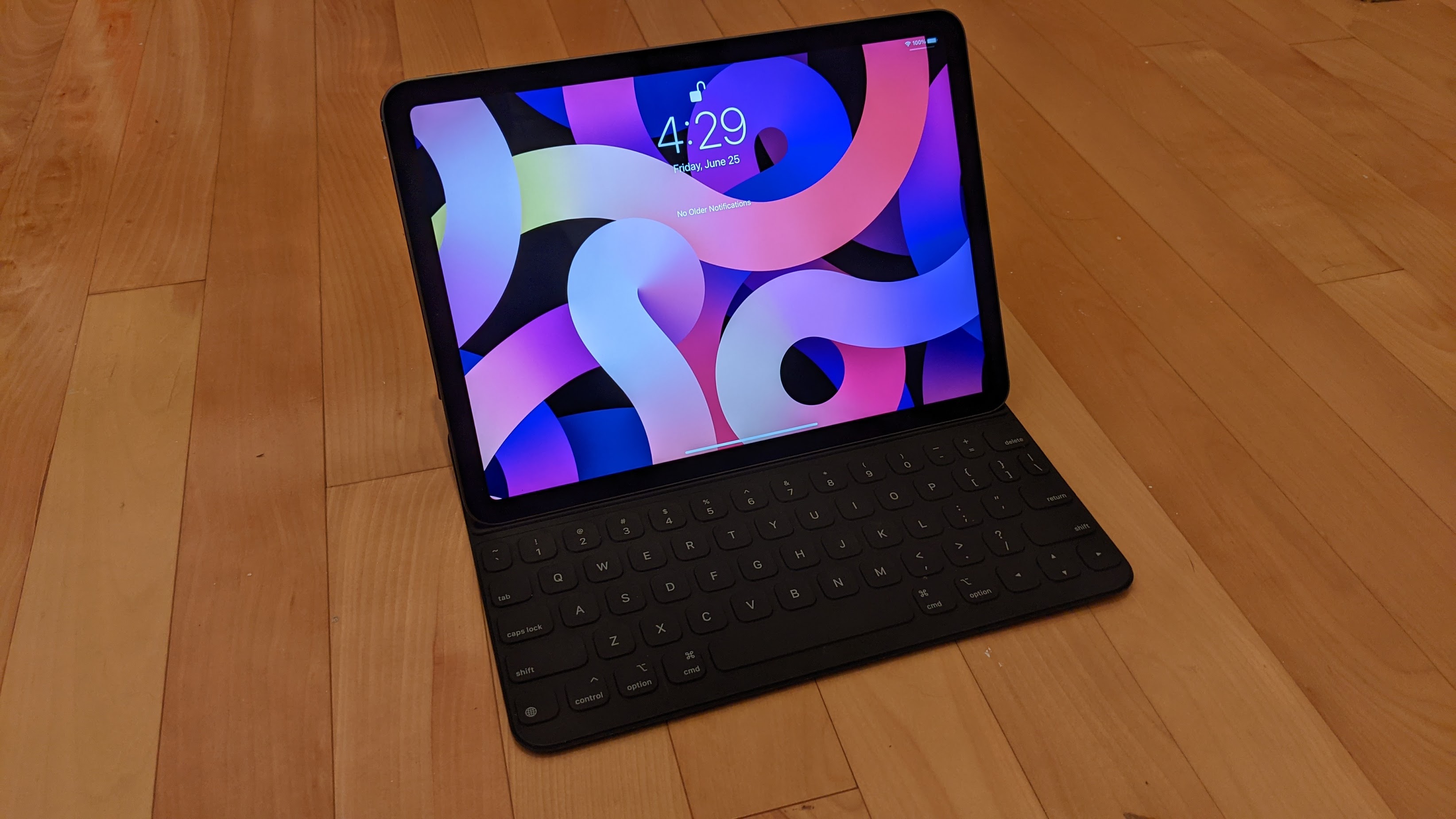 A year ago, I moved out of my job as a startup CTO to become a technical content marketer. I started off doing all the writing myself, which meant creating demo apps, tutorials, and lots of research.

Today, I’ve got a team of full-time and contract employees supporting me, so my role is primarily sales and management.

While I don’t have a “maker’s schedule” of long stints of focus time, I find that I need to do some deep work every day. So, my typical day-to-day is a mix of sales calls, emails, writing, and coordinating projects.

Unfortunately, I haven’t found a great way to write much code on my iPad, so for this trial week, I paused working on any side projects like that.

Despite this limitation, I noticed a few really positive things when I started running my company from my iPad.

I Was More Focused

Having a laptop and a large monitor is nice, but it also means I can have a lot of windows and tabs going at once. This is convenient when I need to rapidly switch between different applications, but it can also be distracting.

I found that working on my iPad meant I was forced to focus on one task at a time, and I was less likely to get distracted by other tabs in my browser. While the iPad supports split-screen, you can’t do nearly as many things at once on it.

This also came into play during meetings. I normally have to shut everything else on my laptop down during Zoom meetings so I don’t get distracted, but since you can’t really do multiple things at once on an iPad, I was forced to focus in on each call.

I’m pretty good about delegating tasks to my team, but working exclusively from an iPad made me take it a step further. I could no longer simply hop into a codebase and fix an error for one of our engineers. Instead, I was forced to leave them comments and delegate the fix back to them.

I also found that working on an iPad made me rethink some of the more complex processes I do on a weekly basis. Many of them were better done by other team members anyway, but because I could do them quickly on my laptop, I had put off delegating them. 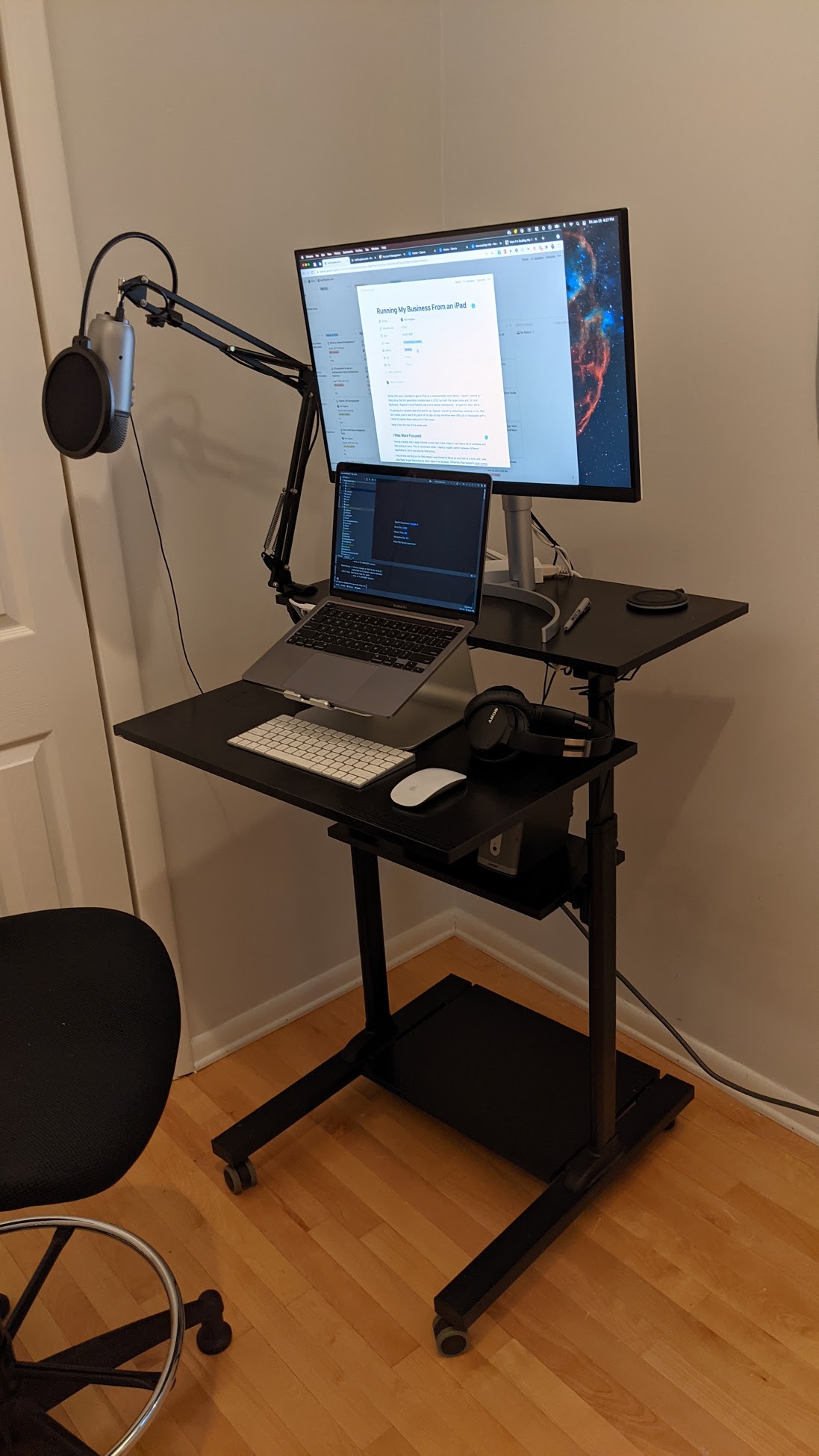 Overall, I’m happy to say that my experiment worked.

There were very few things I couldn’t do on my iPad, even without a lot of preparation work. Some tasks were slower or more annoying, but even with the small keyboard and no mouse, I wasn’t noticeably worse at doing my day-to-day work.

Now, part of this is because my primary job as the Founder of Draft.dev is sales and management. That means most of my work is answering emails, leading calls, and following up with people. I still write every week and mess around with writing code when I can, but those aren’t really my primary functions any more.

Still, I managed to use spreadsheets, presentations, and a lot of other tools that I wasn’t sure would hold up. That said, not everything went smoothly.

I found a couple things that were simply impossible given my current setup. For example, to preview content for my personal blog, I typically spin up a Docker container that runs Jekyll. Well, there’s basically no way to run Docker on iOS due to the lack of a Linux kernel, so that method is out. Similarly, I found that I can’t test out my CFP Land newsletter before I send it because again, there’s no way to run a dev environment like that on an iPad.

I also couldn’t figure out how to create and upload images on my personal blog. Now, there are some workarounds, but I’ll likely try upgrading to a proper CMS and using a Git-based branching scheme to address this shortcoming.

Spreadsheets also suck on iOS. While I could open and use Google Sheets, you can’t create multi-line cells and the small screen makes it hard to see a lot of data at once. Entering equations is also less than ideal on the smaller keyboard.

Another slowdown I encountered was that Grammarly doesn’t work the same way on iPad as it does on a desktop. Using the Chrome extension, I can edit Google Docs and get real-time feedback from Grammarly, but this same workflow is more cumbersome on iOS.

Some iOS apps don’t provide the same options as their web counterparts. For example, both Trello and Airtable lack certain features on mobile (sharing views in Airtable and the Repeater powerup in Trello), so you have to switch over to the browser interface if you need those features. Not a big deal, but it was annoying. Gmail also doesn’t support templates in the mobile app, so I’m going to have to get another app to handle that.

Finally, the battery life on my 4th generation iPad Air is only about 6-8 hours, so unless it’s fully charged before I start the day, it’s probably not going to make it all day. Normally, I wouldn’t complain about that except my M1 Macbook Pro can basically run for three days of work without a charge, so I’ve gotten spoiled.

iPad: Work Machine of the Future?

For someone like me who’s primarily doing sales and management, it’s possible to do 90% of my work on an iPad. That said, it’s not always very satisfying. Some tasks take so much flipping between apps that they can be really frustrating, and because it still doesn’t handle spreadsheets well, it’s really hard to do long-term forecasting or planning from an iPad.

Still, these shortcomings are really just software problems. The underlying hardware and operating system seem like they could handle these tasks, and the battery life will likely improve thanks to the new M1 iPad chips.

It will take a lot of work for software developers or creatives to ditch their laptops for an iPad, but it’s good to know that I can use it for a short time at least.