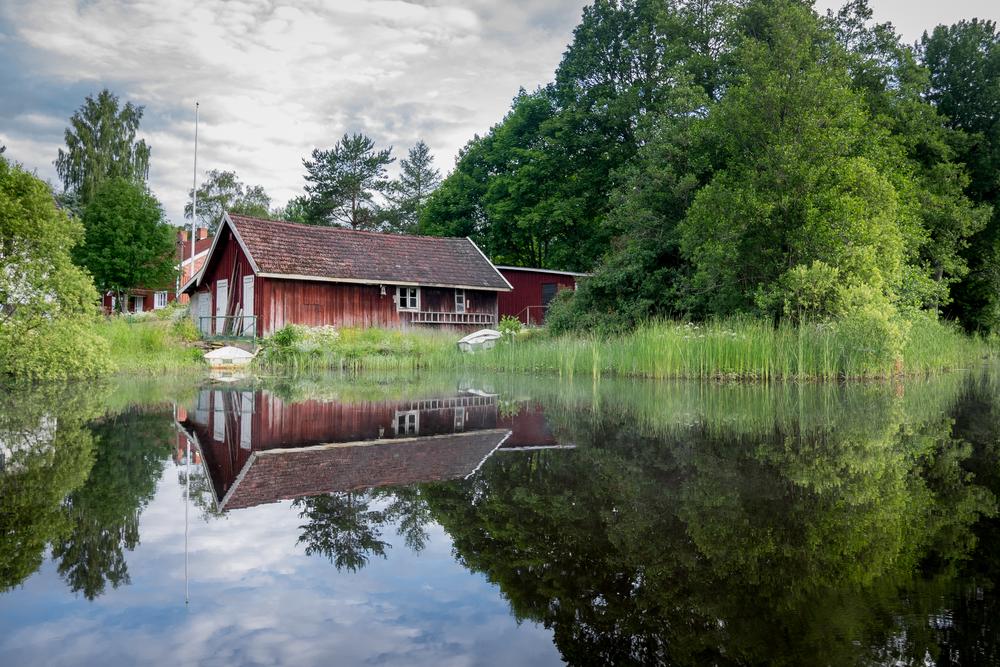 A couple years ago, I had the opportunity to travel to Sweden to see some relatives over there. My aunt and uncle live in Borlange, a small countryside town about three hours northwest of Stockholm. The trip itself was amazing, and I could write a dozen blog posts about it, but one of the most memorable stories was accidentally finding myself alone in a beauty shop with fake eyelashes, a silver wig, lipstick, and perfectly plucked eyebrows.

Hold on a minute, what?

Let me back up. My family (mother, father, brother, aunt, and uncle) and I were walking around the mall in Borlange, looking for souvenirs and any cool European clothing we could find. I had wandered off alone in a store, when suddenly two young Swedish girls approached me. One of them, a cute blonde with huge light blue eyes (I just described every woman I met in Sweden), started speaking to me rapidly in Swedish. Now, I may look Swedish (my mother’s side of the family is close to 100%), but I am sadly not fluent in the language. I apologized, explained to her that I was an American, and asked if she could speak English.

“Ah, yes. We are in fashion school, and we are looking for a model. Can you be a model for hair and makeup?”

First off, everyone in Sweden speaks excellent English, but they’re usually a little timid about using it in conversation with Americans.

Second, if this girl had asked me to jump off a bridge with her, I probably would have done it. Women in Sweden are beautiful, and I love their style.

Third, I’m a pretty adventurous guy, and she didn’t seem like a serial killer, so why not?

At this point, my family had found me talking to two cute Swedish girls, so naturally, they came up to see what was going on. My uncle spoke with the girls in Swedish for a couple minutes, then relayed the message back to me. The two young women were in the equivalent of cosmetology school, and they needed to show off their hair and makeup styling for a final exam. They wanted to know if I could go to the salon they were learning at and let them work their magic.

My family had a trip planned to the world’s oldest mine that afternoon, so I was more than happy to pass for a chance to hang out with the Swedish beauticians. A couple hours later, my uncle dropped me off at their building, and I awkwardly walked in.

Wait, where does the drag makeup come in?

At this point, I only knew they were going to use me as a model for hair and makeup.  I had no idea what that meant exactly, and since the girls in the beauty school were a little timid about speaking English, I couldn’t really get a straight answer. I assumed they would put some light makeup on me (like actors and news anchors wear), style my hair, and then take some pictures. No big deal, right?

When I got down to the training room, I saw the pair of Swedish girls and several guys lined up in barber’s chairs in a long hallway-ish room. They were all speaking Swedish and laughing, but it seemed like everyone was having a good time, so I just smiled ignorantly and sat down. After a quick shave, the Swedish girl in charge of me - her name was Jenny - started plucking my eyebrows mercilessly. It took 30 minutes, and it was one of the most painful experiences in my life. It made getting a tattoo seem like cake, and by the end of it, tears were involuntarily washing my cheeks.

Next, I asked her what else I was in for? ”First we do wedding makeup. Next, you get drag queen treatment,” she giggled. I thought she was kidding, and she wasn’t extremely confident in her English so I figured she might have just been attempting a joke. It didn’t take long to realize that it wasn’t. By this time, I noticed some of the other guys who were a little further along in the process. One was starting to get lip stick and heavy eye-liner. Another had glitter and blush on already. I knew I was in for one heck of an experience.

Grin and Bear it

“Well, I wanted a unique experience,” I thought to myself, “and there’s no way I’m backing out now that I got my eyebrows plucked for free.” I sat there patiently as Jenny applied a nice, light coat of makeup for the “wedding” shots, and she then took a picture. Her instructor came by and they talked in Swedish for a few minutes. They both laughed and the instructor walked away.

Then, she pulled out the big guns. In a few minutes, I had wild green eye shadow, gold glittery eyelids, long faux eyelashes, and a painted on, lipstick smile. The eyeliner was the worst part. After the extreme plucking, my eyes were still watering, and not being used to having eyeliner on (okay, maybe I used it a couple times in high school), I was a real wimp to it.

All the guys at the table were in the same boat as me by this point. They were all laughing, taking pictures, and talking happily in Swedish. Naturally I had to get a photo with my artist, Jenny, before I left. I’m sure that photo will surface someday to haunt me, but until then, I’ll leave it to your imagination.

After several minutes of washing in the bathroom, I got most of the makeup off, but it probably took a week for all the glitter to dissipate. Overall, I can’t say that it was a bad experience, mostly because it was such so unique. I’ll admit, I won’t be doing this on a weekly basis, but at least I can say I tried it, and that’s more than most can do.

Do something every day that makes you uncomfortable

At some point in your life, you’ll be asked to do something that makes you squirm or scares you.  People who continually avoid things that they don’t like, tend to be very shallow, inverted thinkers who never open their mind up to innovative and revolutionary thinking. Make this your daily or weekly challenge: do something that scares you.

If you want to be successful, you do have to embrace things that make you uncomfortable; you have to be open to new places, people, ways of working, etc. Don’t ever let your fear of things that are different dictate your life.