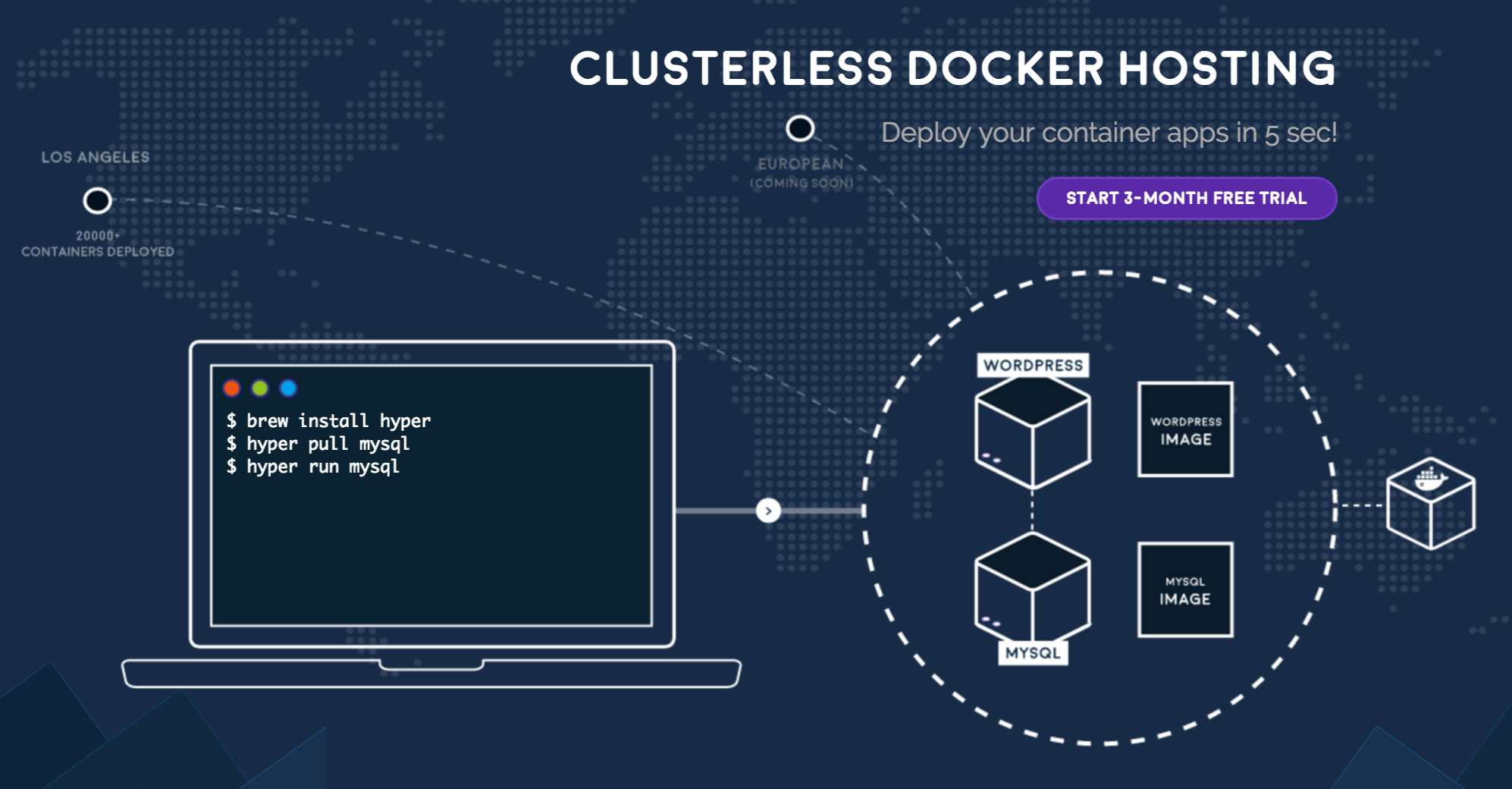 Do Not Trust Hyper.sh or Kata Containers

Since writing this post, Hyper.sh has pivoted and no longer offers its container hosting. They gave users less than a month to move off their platform, so I no longer recommend working with Hyper or Kata Containers. The company never gave me a reason for the shutdown, and refused to offer any substantial tools to help with migration. Do not trust this company for your production workloads.

I’ve been doing a lot of searching for a simple Docker hosting experience lately.

I’m pretty committed to Docker Compose for running containers locally and Codeship for my continuous integration, but I hadn’t found a container hosting service that was (1) simple enough for me to use on side projects, (2) reliable enough to use in production, and (3) not prohibitively expensive.

My goal this weekend was to get a couple side projects up and running on Hyper.sh, and here’s how it went.

Both the projects I wanted to deploy this weekend were NodeJS apps: my personal blog, and a microservice that emails me the latest articles from Feedbin every day.

Currently, both projects were set up on a Digital Ocean droplet and running with Docker Compose. That meant that I had to write a lot of scripts to automate deployments, and it was honestly a huge pain point. I’ve found that for side projects if I don’t automate the minor stuff (deployments, CI, etc.) I probably won’t update them very often. Digital Ocean droplets are great, but each one cost me at least $10 (the $5 ones couldn’t build my Docker images reliably), and running multiple side projects on each was problematic. If one went down or had a memory leak, it would take other ones down with it. Another option I’ve used in the past is Heroku, which I also like, but I don’t know about its support for Docker. If anyone’s tried that I’d be willing to hear about it.

Since my semi-automated process hosting on Digital Ocean wasn’t working well for these two apps, I decided to find an alternative.

I read about Hyper.sh on HackerNews a while back. I liked the idea of container-first infrastructure, and I first got an MVP of my personal blog running on their containers back in February. I didn’t migrate then though as I hadn’t figured out how to move data around, so when I sat down this weekend, I realized that it would actually work pretty well for my workflow.

So here’s how I’m using Hyper.sh for both of the projects mentioned above:

For my personal blog, I downloaded my blog’s data (it’s using json files and NEDB) from its current server and created a Hyper.sh Volume. I then attached it to a container that runs the NodeJS process using a Hyper Compose file. Then I attached the container to a Hyper.sh FIP which I mask using CloudFlare for DNS.

Now when you go to www.karllhughes.com you’re getting served a Node app running on a 512MB Hyper.sh container which costs a fraction of what my DigitalOcean container did. It’s also easier to manage. When I update code and push it, Codeship builds the image, pushes it to Docker Hub, then uses a Hyper.sh CLI container to pull and recreate the container.

The feedbin-mailer project is even easier since it doesn’t need a webserver. When I update code, I again use the Hyper.sh CLI container to update the image, then I set up a Hyper.sh Cron job to automatically run the script every morning.

Since writing this post, Hyper.sh shut down and gave users less than a month to move off their platform. I do not recommend working with Hyper or Kata Containers. The company never gave me a reason for the shutdown, and refused to offer any substantial tools to help with migration. Do not trust this company for your production workloads.